If you’ve never heard of Aston Microphones, they are an iconic British brand in the world of microphones. According to their FaceBook page (http://www.facebook.com/astonmicrophones), they manufacture boutique microphones to give a perfect and unqiue mix of beauty and engineering excellence.

At NAAM 2017 in Anaheim CA, the wonderful chaps at Aston launched the new Starlight condenser microphone – complete with laser guidance!!! Yes, you did read that – laser guidance.

As well as the laser, the Aston Starlight microphone features a 1.5mm stainless steel body and a 20mm cardioid capsule. The capsule was hand-picked in a double-blind listening test by Aston’s panel that features more than 50 top producers.

For more information, check out the Aston Microphone website. I think you’ll agree from this picture below that it is a truly beautiful microphone 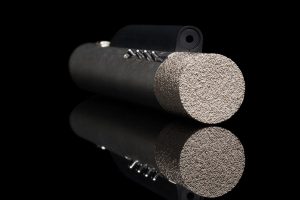 The reason for the laser is not so that you can play games with the sound man or try and zap band mates though.
The guys at Aston say that the reason for the laser is so that you can much easier line up the microphones in each recording session you do. But that I mean, lets say that you’re going to mic a guitar or overheads on a drum kit, then you can use the laser to pinpoint where the mic is pointing to, take a photo and then for each subsequent session, its easier and quicker to set up the microphones exactly as they were last time.

The guys at Aston explain it far better than I can in this video….

I need to get some here at DrumTracksByJulian.com HQ